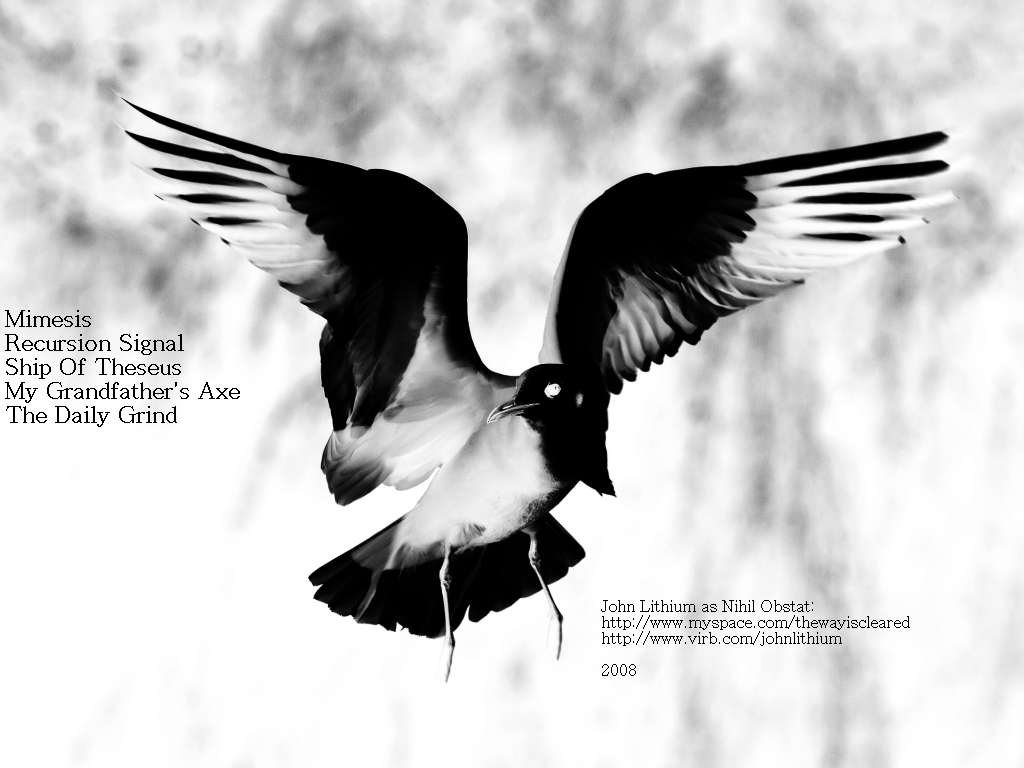 
Artist's Description:
One of the most important truths regarding Nihil Obstat's existence is that it is fundamentally non-ideological in nature. That is not to say that it is devoid of emotional impact or that it does not lend itself to certain interpretations or conclusions. Instead, it deviates from the modus operandi of many other noise/power electronics groups who choose to use their group to promote their extremist philosophies, rather than advancing the musical genre which they represent. While I do not necessarily condemn or condone such activities or beliefs, it often appeared to me that many of these groups present these philosophies either for shock value or an attempt to engage in cultural terrorism and/or re-programming. My conviction has always been that Nihil Obstat (and the power-electronics/noise genres in general) do not need such unneccesary ideological 'attatchments' in order to attract listeners.

"Reclamation" is defined as "the process of reclaiming something from loss or from a less useful condition". This encapsulates not only the particular aim of this album, but the ideals of Nihil Obstat as a whole: the creation of noise for people who do not need to be sold tired fascist/nationalist ideals or boring, outdated and inaccurate misanthropic/misogynist theories/practices. Nihil Obstat is for noise/power-electronics fans who realize that noise, as a genre, is legitimate even without the constant shock value that tends to be attached to it (often for no honest reason other than to move units of limited editions). Finally, N.O. is for those whose minds and hearts have not been corroded and closed by extremist fanaticism, those who still possess some degree of an open mind and inquisitive nature, who refuse to take anything at face value without at least a cursory search for truth.

Here are a few thoughts into one possible set of interpretations regarding the compositions which compose "Reclamation". Please note that these are only my personal thoughts/theories regarding the concepts involved, PLEASE feel free to attach your own emotional / conceptual / political / philosophical interpretations to the tracks as you see fit (or simply enjoy them at their face value).

Mimesis : Another study into the nature of mimicry, specifically the function of representing the external environment. The world around us is a senseless and cruel physical construct, which we cannot even perceive correctly due to various limitations inherent in our senses. Thus, what we can discern is often distorted, harsh, and frightening.

Recursion Signal : It can be claimed that the largest example of recursion could be human history. If you are of a cynical mindset, you can argue that, despite changes in procedural steps (which manifests itself in this case as historical events), the end result is cyclical phases which end in the same result: higher levels of technology with ever-decreasing levels of overall happiness and rapidly deteriorating living conditions around the planet.

Ship Of Theseus : "The ship wherein Theseus and the youth of Athens returned [from Crete] had thirty oars, and was preserved by the Athenians down even to the time of Demetrius Phalereus, for they took away the old planks as they decayed, putting in new and stronger timber in their place, insomuch that this ship became a standing example among the philosophers, for the logical question of things that grow; one side holding that the ship remained the same, and the other contending that it was not the same." (Plutarch). More historical examples of the "Theseus Paradox" include the Gold Pavilion Temple and the Ise Shrine (both located in Japan). The basic question is: does a particular object, which has it's component parts removed and replaced (with segments completely identical to the parts being removed) remain the same object afterward? This paradox tends to also bring four dimensionality arguments to the foreground, with interesting results...

My Grandfather's Axe: "It's had three new heads, and four new handles, but it's still the same old axe."

The Daily Grind: At times it is hard to get through the day without a cup of coffee.


Net-Label Description:
This album ranges from scratching abyssal noise with a hint of harmony to twittering walls of industrial sound attacks, that send its listener into a roaring torrent of auditory overload and gives one an impression of their brains being crushed to powder and reforming again and again in a clearer state of thought. It is conceptual and emotional but for a good reason. It doesn't exist to simply gather attention. All that being said we here at Sounds Abound have one more thing we would like to convey. WE WANT MORE!!!